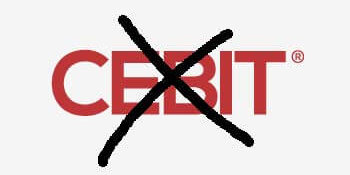 Over and out. The once largest computer fair CEBIT is closed.

Setback for the trade fair city of Hanover: The end for one of the world’s largest IT and computer trade fairs is decided.

The sad end of CEBIT in Hanover

What do Bill Gates and Angela Merkel have in common? Right – both were prominent visitors to the once largest IT trade fair in the world, CEBIT in Hanover. Bill Gates was there in 1995 to present Windows 95 in person, and Angela Merkel opened the show as chancellor in 2010 and 2012. In 2001, around 850,000 visitors from all over the world came to Hanover. This shows the dimensions of the fair once had. Now it has been announced that the attempt to revive the fair with a new concert failed in the middle of this year – the fair is discontinued.

32 years ago, CEBIT was organized as an independent large IT trade fair. Well-known companies such as Siemens, Honeywell and IBM were the biggest exhibitors of the time. The 81,220 m2 area of the first hall was quickly exhausted. Therefore, three more halls were made available. Thousands of national and international visitors & decision-makers made annual pilgrimages to Hanover.

This year 2018 everything was different at CEBIT. In the past 32 years, the fair has almost invariably taken place in March – but this year it has been moved to the summer. Where did the change come from? Oliver Frese, CEO of Deutsche Messe AG, revealed in an interview with Computerwoche that in addition to established target groups, younger audiences (the 20- to 30-year-olds) should be addressed this time: “They already bear some responsibility, or are the Tomorrow’s decision-maker.”
The hall setup was also new. The exhibitors could no longer be found in their places from previous years as usual, because almost every exhibitor had to move due to the subdivision of d!tec, d!conomy, d!talk and d!campus. As a result, the companies were able to present themselves anew. D!tec presented research and young companies, d!conomy was the core element, served the business initiation and presented new technologies. Unfortunately, the number of visitors dropped from 200,000 in 2017 to only 120,000 in 2018. The new concept did not arrive.

Many of the now former exhibitors and companies involved will now have to choose different distribution channels. So do we. We have been part of CEBIT in Hanover for more than 20 years. As an exhibitor, we used CEBIT as a lead source and platform to present our products. We will now focus on alternative exhibition opportunities and seize new potential.